The portfolio of Jonathan Boho, web developer and designer

I'm a front-end web developer and designer currently working at Eplexity in Denver, CO.
And these are some of the things I've done ... 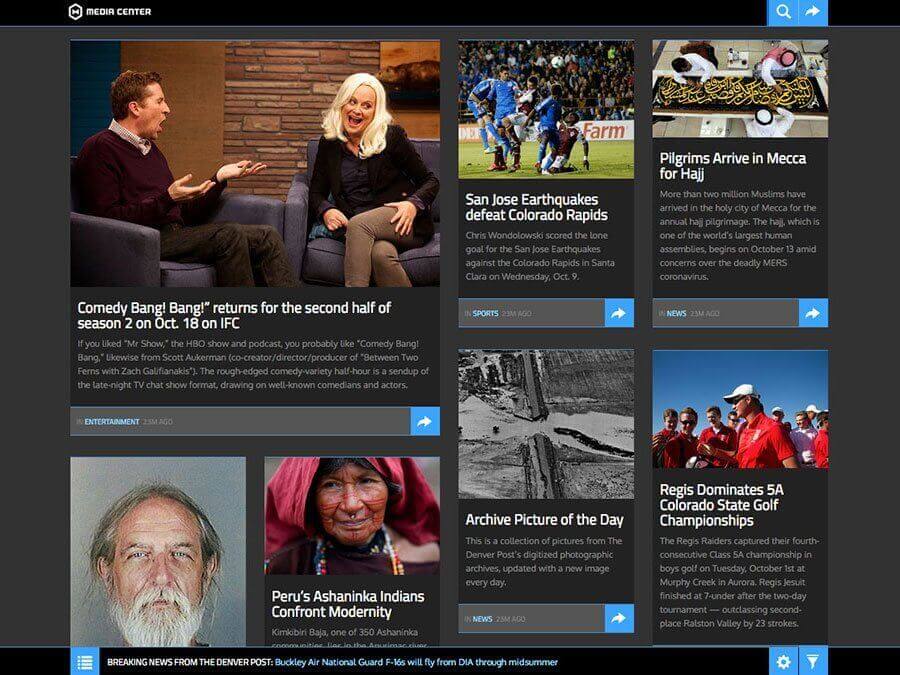 Media Center was a rich-media site that features the best daily photojournalism and videography from The Post and elsewhere. This redesign includes a mobile-first responsive approach that greatly simplifies the navigation and gives a larger showcase to the photos and videos that comprise the site across mobile, tablet and desktop platforms. 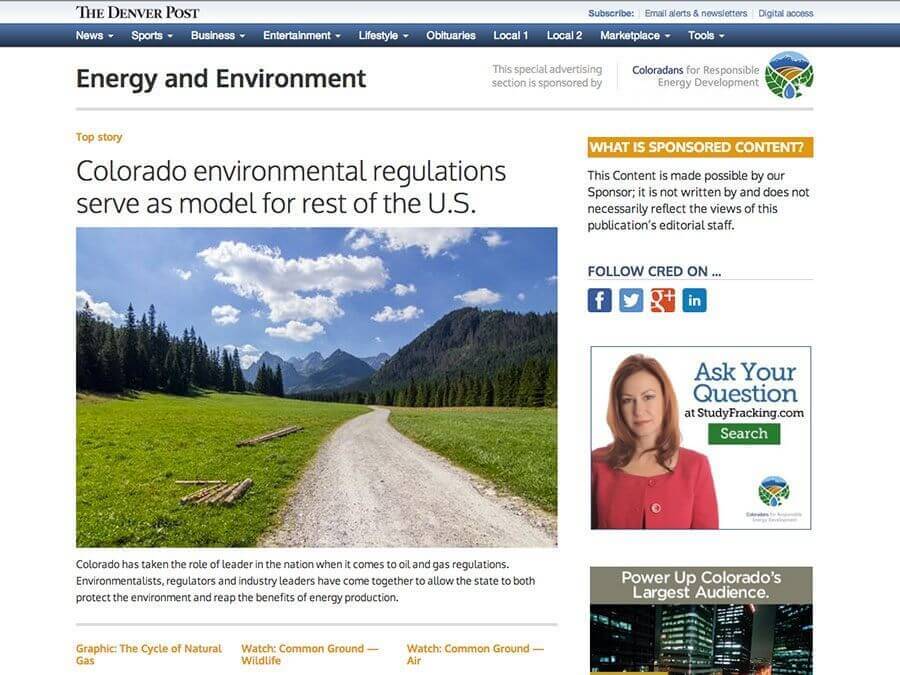 The Denver Post redesign was a massive project that has undergone a couple of stages of design and development. In the initial stage, I was the lead designer on the project. I inherited an existing design and proceeded to revamp it by interpreting the needs of numerous internal stakeholders.

Since then, I have been developing new comps based on the redesign that are closer to the original vision of site. Development of a proof of concept with these designs in WordPress is underway with the hopes of being able to switch to this less costly and highly flexible open-source alternative.

In addition, this alternative design has the added advantage of a full month of user testing we performed on the site in February 2014. Feedback from those sessions have allowed us to consider pushing The Post into a completely new direction, and a version 3 of the site is currently in the wireframing stage. For now, however, this is the working design. 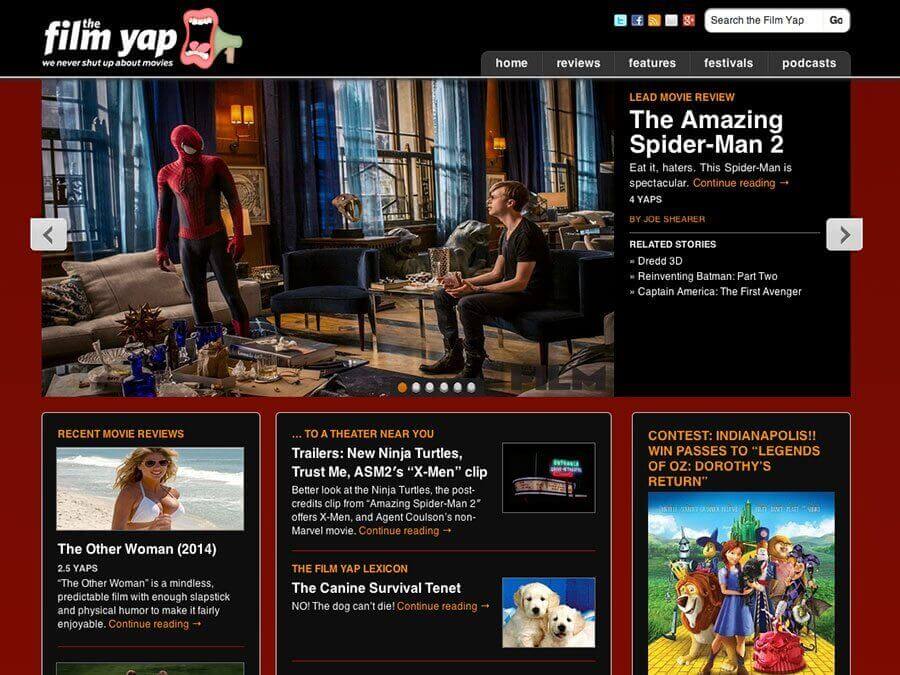 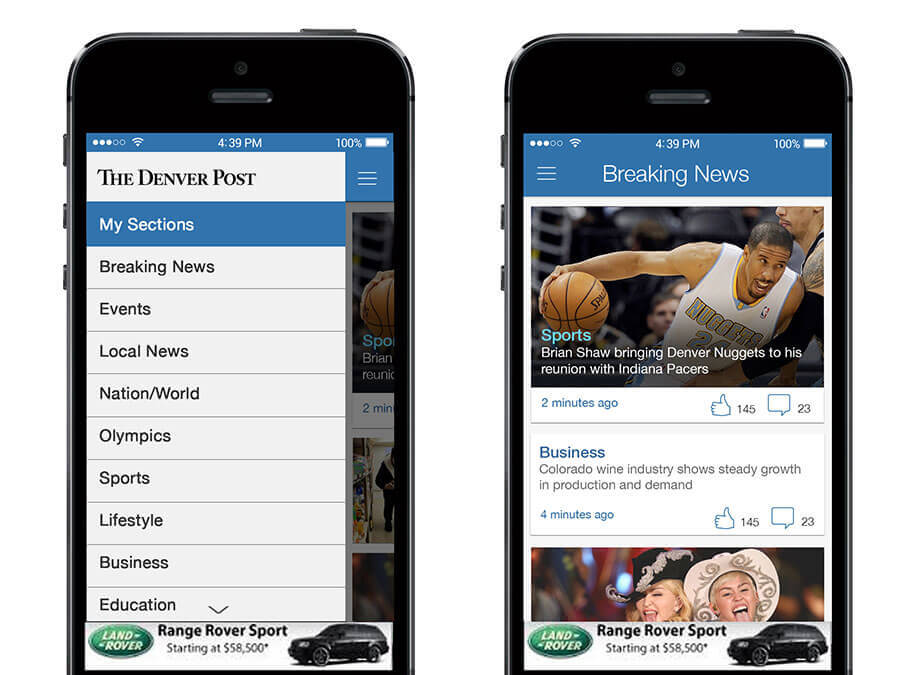 This version of Digital First Media's iPhone and iPad native applications features a cleaner interface and a full, multi-level navigation that includes options for customization and favoriting topics. In addition, social-sharing options are greatly enhanced. Although the above prototype is of The Denver Post, this app is scheduled to be deployed across all of Digital First Media's 40-plus newspaper properties. 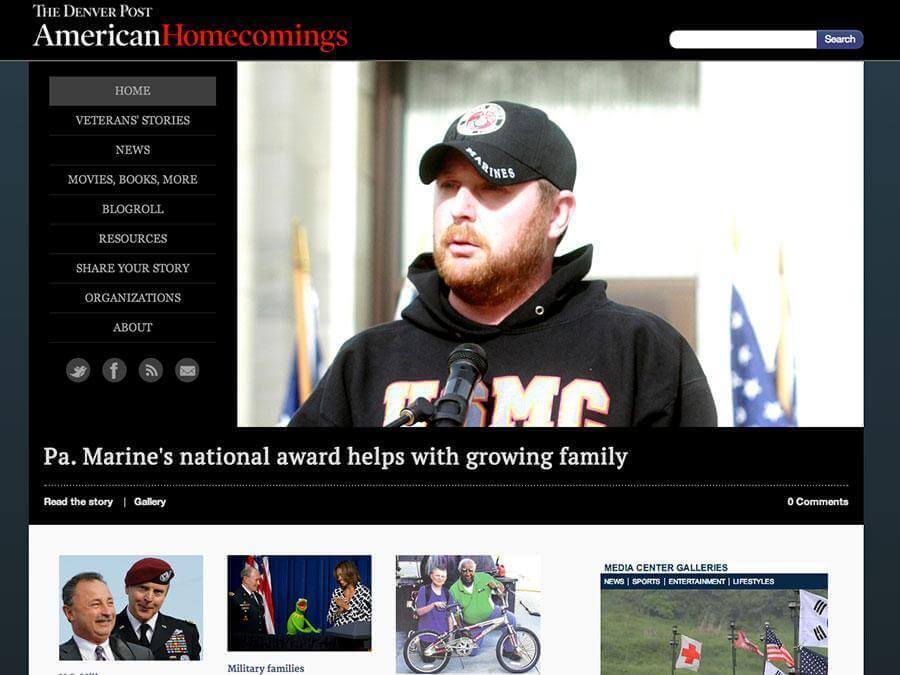 American Homecomings is an award-winning site designed to tell the stories of veterans returning home from combat in both the Iraq and Afghanistan wars. The site was built in WordPress by The Denver Post's newsroom development team with stories coming from all of The Post's sister properities. In 2012, the site won an EPPY for Best Community Service of a Media-Affiliated Website. 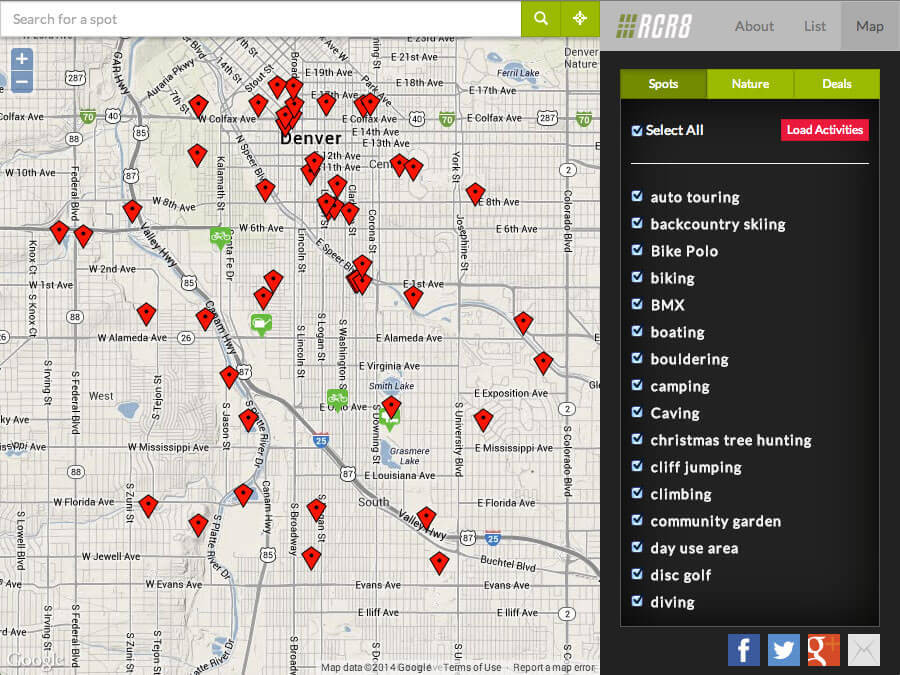 RCR8 is a map-driven single-page web application that helps people find and share great places to go for outdoor recreation.

In addition to the app, there is a desktop, non-map-based version that sorts listings by state and a widget for publishers to add to their site.

For the next version, plans are to port the application to the Angular framework for greater speed and reliabilty. 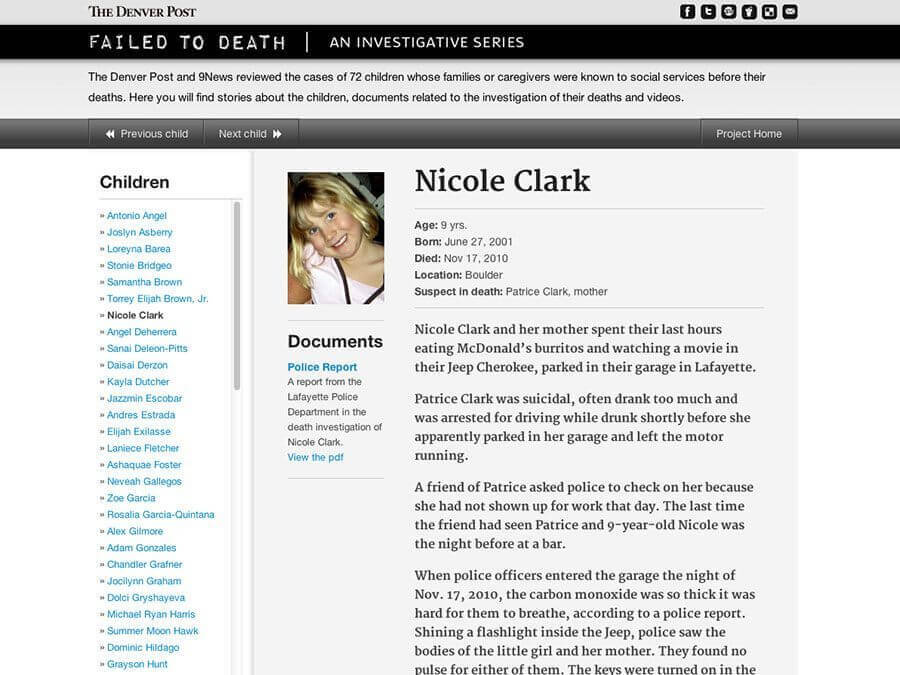 Of all my work at The Denver Post, I am proudest of my involvement with this investigation for the simple fact that this project exposed an unaceptable state of affairs within Colorado's state welfare system. Denver Post and 9News investigators found that 72 of the 175 Colorado children who have died of child abuse over the past five years were known to human services before their deaths.

This multimedia presentation was part of a broader online package on the investigation. It ties together all the heartbreaking details, including original state documents, video interviews and the stories and faces of the children themselves. 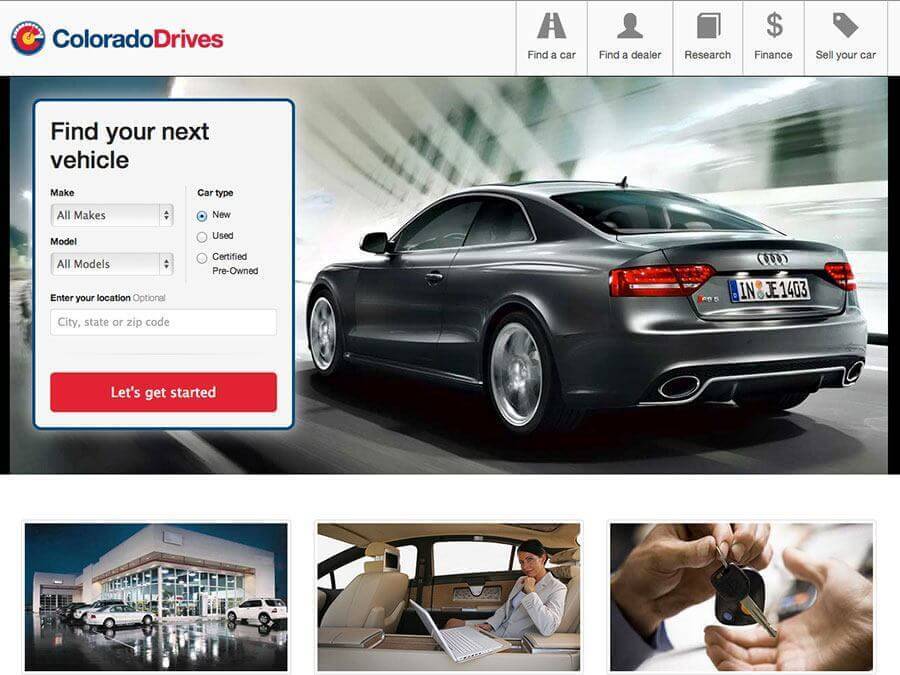 The original front page of Colorado Drives was a link that went straight to the listings, which, at the time, we thought would be a nice touch since it took people right to where they could start looking at cars. Instead, it turned to be a rather unfriendly and overwhelming experience.

With that in mind, I redesigned the home page to center around a short form to send people to the listings and feature some of the site's reviews and content, which had been completely lost in the original version.

The interior of the site is handled and hosted by a white-label vendor called Vast, who also powered TruCar. The next step would be to revamp some of those pages to make for a more consistent user experience, and to that end, we've engaged on some user testing that has given us some great ideas on a new direction. 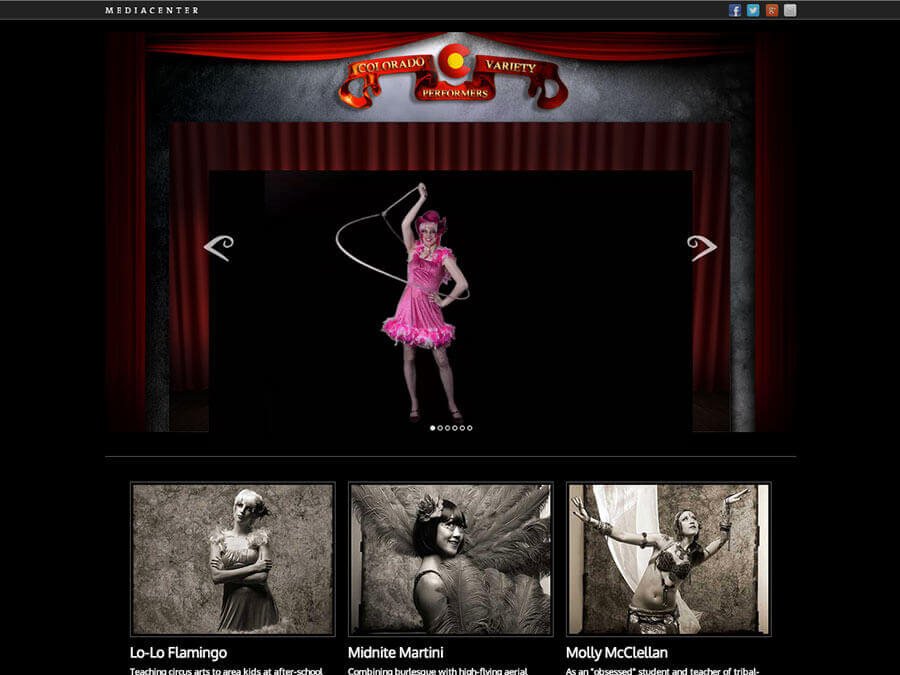 Vaudevillians do still live among us. This short, little one-off project for Denver Post's Media Center shows off some great content with a vingette and video for each of the six performers. The front carosuel features a looping, full-body video of each the performers doing a signature trick.